The Battle of Fort George 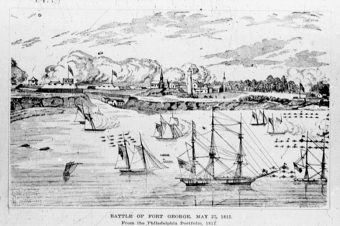 Looking for a strategic stronghold in the region, the American Army shelled and destroyed all of the wooden buildings at Fort George on May 27, 1813.

Outnumbering the British 3 to 1, approximately 5000 Americans would cross the river and occupy the fort and the town of Niagara (presently Niagara-on-the-Lake) just 2 days later.

However, the Americans were unable to exploit this advantageous position, as the British and Aboriginal forces kept them from advancing any further. In the face of a British attack, the Americans saw no advantage in keeping their position, and retreated back across the Niagara River, just seven months after they captured the fort.

Visit our Winery View Our Wines

Palatine is excited introduce our very own cheeses made in collaboration with Gunn’s Hill Cheese in Woodstock, Ontario.

Free Shipping within Ontario when you spend $99 or more!